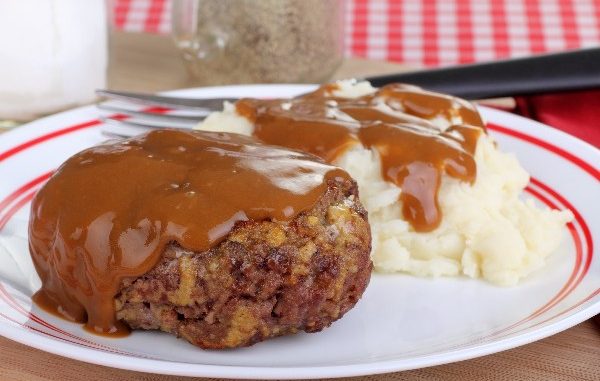 Reviews about the recipe

“This recipe was easy and made large servings. Like Beachwaves i used Golden Mushroom on the bottom of the pan but poured brown gravy on top which added depth and made a beautiful dark golden brown gravy. I took one serving and Immediately hid it way back in the fridge for tomorrow’s lunch. A Hit!”

” First time making Salisbury Steak and it turned out great! I made some changes to the recipe. Didn’t use the water. I used Pepperidge Farm Stuffing Mix instead of bread crumbs. I also used a pack of Lipton onion soup mix, sprinkled in some all-purpose flour and Worcestershire sauce. I also seasoned my meat with some of my seasonings. I removed my patties out of the skillet, poured out grease & wiped skillet out before putting patties back in. I use frozen onions so I put those in the mixture & when I poured my gravy on the meat I added more of the onions into the gravy! This will definitely be in the rotation!!”

” I made this tonight for dinner. The only thing that I did different was I added a can of Campbell’s Golden Mushroom soup to the bottom of the pan with a splash of water to dilute the soup and then I poured the Campbell’s beef gravy on top. I put some away to take to work with me. When I woke up I was told that the dinner was so good that they even ate what I was going to take to work.”