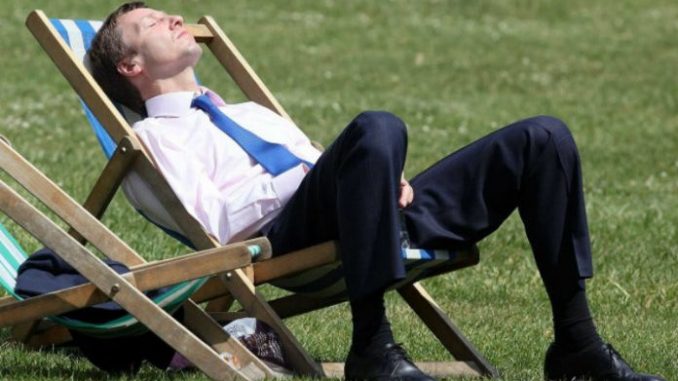 The findings of a study done by the Melbourne Institute Worker Paper showed that people older than 40 are most productive when they work only 3 days a week.

This might also indicate that the efficiency and productivity of people reduce over the years. The aim of the researchers was to analyze the cognitive abilities of workers over 40.

Data used for the study was drawn from the Household, Income and Labour Dynamics in Australia survey, conducted by the Melbourne Institute of Applied Economics and Social Research at the University of Melbourne.

Researchers analyzed the family structures, employment, and economic and subjective well-being of participants. They were asked to recite lists of numbers backward, read words aloud, and to match letters and numbers under time pressure. Results showed that the ones that worked 25 hours a week got the best scores on the tests.

According to the report:

“Work can be a double-edged sword, in that it can stimulate brain activity, but at the same time, long working hours and certain types of tasks can cause fatigue and stress which potentially damage cognitive functions.”

When they were working 5 days a week, participants were found to perform much worse, compared to their performance in the case of 25- hour working week.

The poor results were apparently due to fatigue and stress, and according to professor Colin McKenzie, one of the leading authors of this study, the level of intellectual stimulation is deeply affected by the working hours. Work stimulates the activity of the brain, and it is also the main cause of fatigue and stress.

The conclusion of the study was that the working hours have the main influence on the cognitive functions of people, and working for more than 30 hours a week negatively affects the brain health in middle-aged people.

According to professor McKenzie, it is very difficult to specify the effects of each job and the way it affects the cognitive function of a person, so people should always choose their job according to their cognitive abilities.

On the other hand, Geraint Johnes, professor of economics at Lancaster University Management School, maintains:

“The research looks only at over-40s, and so cannot make the claim that over-40s are different from any other workers. What the authors find is that cognitive functioning improves up to the point at which workers work 25 hours a week and declines thereafter. Actually, at first the decline is very marginal, and there is not much of an effect as working hours rise to 35 hours per week. Beyond 40 hours per week, the decline is much more rapid.”

Therefore, scientists do not have a clear explanation of these findings and the reality that working more than 30 hours a week negatively affects the brain, even though we all know that a lot of work leads to tiredness and stress.

Yet, these attempts raise the awareness for needed changes in the system, since it is completely natural that the elderly are no longer able to do the same work as they did forty years ago.

What you can do now is to choose a job that you enjoy doing, in order to lower the stress it causes, and minimize its negative consequences on health.