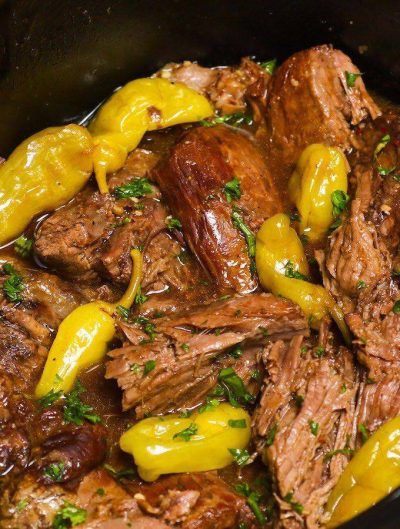 Pot roast refers to a beef dish that’s prepared by cooking meat slowly in moist heat. Usually, tough cuts of meat are used in this process. There are different variations of pot roast and one of them is the Mississippi pot roast. It’s called Mississippi pot roast because the original recipe came from a home cook who first prepared it in Mississippi. It has since grown in popularity and you can count on this dish to please a crowd. It’s usually seared to golden brown and seasoned until tender. It’s full of flavor and you will enjoy it. In case you’ve never tried it, here’s a recipe for Mississippi pot roast that you could try out:

Place the chuck roast into a 6-quart slow cooker.

Sprinkle au jus mix and ranch mix on top of the roast.

Add butter and peppers around the roast.

Cover the slow cooker. Cook on LOW setting for 8 hours, or HIGH for 4-5 hours, or until the meat is fork-tender.

Turn the instant pot onto Sauté mode. Add 1 tablespoon oil followed by the meat. Sear the roast on all sides (4-5 minutes each side) until nicely browned.

Add the pepperoncini peppers, ranch mix, au jus mix, butter and ¾ cup of water. Cover with the lid and close the steam valve.

Turn off Sauté mode and set to “Manual” mode for “High” Pressure Cook for 80 minutes.

After the cooking cycle finishes, allow for a natural pressure release (about 15 minutes).

After that, use the quick pressure lever to manually release any remaining pressure and turn off the pot.

Carefully remove the lid and transfer the roast to a plate and serve.

Place an oven-proof pot on medium heat and add 1 tablespoon oil. When hot, sear the roast on all sides (4-5 minutes each side) until brown.

Add the pepperoncini peppers, ranch mix, au jus mix, butter and ¾ cup of water. Bring to a simmer and cover.

Transfer to the oven and roast for 3-4 hours until the meat is fork-tender.

Things to avoid when making your Mississippi pot roast include:

Using the wrong type of roast

It’s easy to think that any cut of beef could work for the Mississippi pot roast but this is not exactly true. When you get beef cuts that have insufficient connective tissue, it will turn out either too tough or mushy in the preparation process. Instead, buying roasts such as chuck, or brisket is best. The recipe above uses chuck. These contain sufficient connective tissues that will break down slowly into collagen. Subsequently, the meat will be tender and full of rich flavor.

Failing to brown the roast

The process of browning roast usually feels so difficult and unexciting. As a result, some people are tempted to skip this process altogether. You should do the browning though as it makes the roast even tastier.

Cooking for a longer or a shorter time

The recipe is supposed to guide you on the entire process of cooking this Mississippi roast. So, you should avoid cooking for too long or for a shorter time.

Removing the roast when the gravy isn’t thick

One of the things that set Mississippi pot roast apart from beef stew is the gravy. You should, therefore, avoid removing the roast before the gravy thickens. Allow it to get all thick and velvety so that your Mississippi roast is thicker than your ordinary stew. Just make sure it doesn’t get all lumpy in the process.

How do you make Mississippi pot roast healthier?

When looked at generally, roasting is supposed to be a healthy form of cooking that helps minimize loss of nutrients, however, when you’re going to be roasting for a long time, and at higher temperatures some nutrients that drip from the meat may be lost. However, to get some of the lost nutrients, it’s worth serving the pot roast alongside the meat.

As you can see, by following the recipe, you get a great meal and this is particularly a good one for people who love to eat pot roast since it’s another variation to try. You can serve it with some garlic potatoes, preferably mashed, and some beans. You’ll enjoy it and so will everyone else who’ll get to try it.