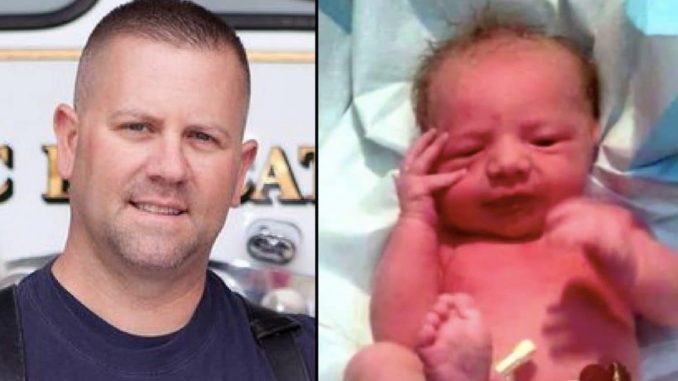 Firefighter Marc Hadden was first on the scene when a woman called 911 complaining of stomach pain. It didn’t take long for him to realize this wasn’t any old stomachache – the woman was in labor.

While Marc had saved dozens of lives during his time with the department, this was the first time he had ever delivered a baby. He was in awe as he helped bring this new life into the world.

“She struggled from the minute she was put in my hands,” Marc recalled.

He administered emergency oxygen to help get the infant breathing on her own.

“It was amazing to hear her cry,” he said.

The woman and baby were whisked off to the hospital, but Marc couldn’t get them out of his mind.

He and his wife, Beth, already had two young sons of their own, but they had always wanted a third child.

Because of complications with their first two pregnancies, they had decided they would go the adoption route, but it was a long and expensive process.

When Marc overheard that the birth mother wasn’t going to be able to take care of the baby, he told the hospital he was interested in adopting her. Then he called Beth.

“I delivered a baby,” he told her excitedly.

“Can we keep her?” Beth joked.

That’s when he broke the news.

When Beth heard that the baby’s mom was a single mother already struggling to raise a teenage son, she felt compelled to go visit her.

“My heart just went out to this woman,” Beth said.

She brought the woman a little prayer book and asked if she could get her anything.

As the two women talked, a doctor walked in and told the mother they were ready to move forward with the adoption. That’s when the woman turned to Beth and told her, “I can’t give my baby to someone I’ve never met.”

“Suddenly the opportunity was there for me to say that Marc and I had been praying about adoption for years,” Beth recalled.

“And she looked over at me and said, ‘I want you to adopt my baby.’ She had the nurse bring her in and I was able to hold Gracie for the first time. I called Marc and said, ‘I think we just had a baby.’”

By the end of the day, temporary-custody papers were signed. Just 48 hours after Marc helped deliver her, little Rebecca Grace went home with her new family.

“She is what we prayed for,” Beth said. “It felt like winning the lottery.”

That was six years ago. Today Gracie is an adorable young girl who loves wearing bows and tutus, practicing gymnastics, and joking around with her older brothers.

Marc and Beth have always been very open about how she came to be part of their family.

“We told her pretty much from day one,” Marc said. “I’ve taken her to the back of the ambulance where she was born, so she knows — no doubt about it.”

Little Gracie loves to tell people the story of how “my daddy delivered me in the back of an ambulance [and] helped me take my first breath.”

Gracie’s story is definitely not a typical one, but the family knows it was meant to be. Marc and Beth say they pinch themselves daily because they feel so lucky to have Gracie in their lives.

“I’ve always wanted a daughter, and this is just amazing,” Marc said.

“Sometimes the best things in life happen in the blink of an eye,” Beth added, “and you can’t let them pass you by.”

Were you amazed by Gracie’s incredible birth and adoption story? Then share it!

When we turn on the news these days, it seems like all we ever hear about is the bad stuff going on in our world.

But there are still good people and good things happening all around us! We think these stories are important to share and we love bringing them to your NewsFeed every day.