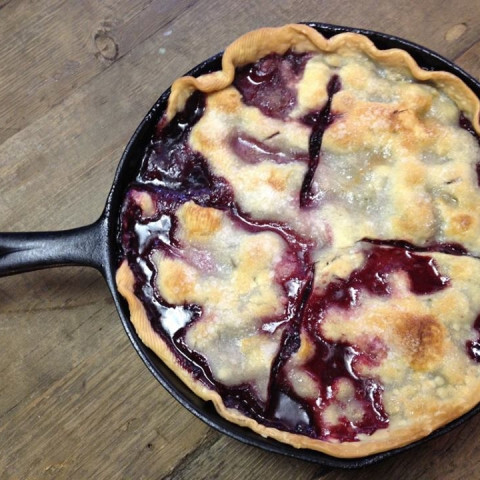 This recipe isn’t rated 5 stars for nothing, it’s excellent! But, a few changes could be made. You either have to increase the dough or decrease the pan size. I used a 8 x 8 baking pan and the dough amount was perfect. I also added cinnamon to the dough and berries, and vanilla extract to the dough. I used tart wild black berries and it was still a little on the sweet side, I would probably decrease the sugar by a 1/4 c.

Excellent! With family stretched across 5 southern states cobbler is a tradition, and this recipe certainly rates as good as, if not better than, most family recipes (don’t tell Grandma). Both me and my dad agree that this is a superb recipe. The only changes I made were to add 1/4 tsp. of freshly ground cinnamon to the dough, and another 1/4 tsp. to the fruit mix, and also a little extra lemon juice. Nothing that would really change it. Also, my new rangetop doesn’t allow cast iron skillets 🙁 No big deal. I boiled the fruit mixture in a large sauce pan and transfered to a casserole dish (uncovered) while still bubbling, and then added dough. Voila!! I don’t think I’ll ever need another cobbler recipe. When the blackberries run out I think I’ll try it with apricots. Edit: I’ve since increased the dough mixture by 50% and reduced the sugar in the fruit mixture by half (with other member recommendations). Much better!

2.Unroll one pie crust and place in bottom and up sides of 12 ” cast iron skillet.

3.Pierce bottom and sides of crust with a fork.

7.Put berries in bowl with butter/sugar/flour mixture; toss until berries are covered and mixture is crumbly.

9.Unroll second pie crust over top of berries, sealing at the edges of the skillet.

10.Scatter the small pieces of butter on top of the crust.

13.Bake approximately 45 minutes or until bubbly at edges and beginning to brown on top.

14.(I highly recommend a pie shield to keep edges of crust from burning.)