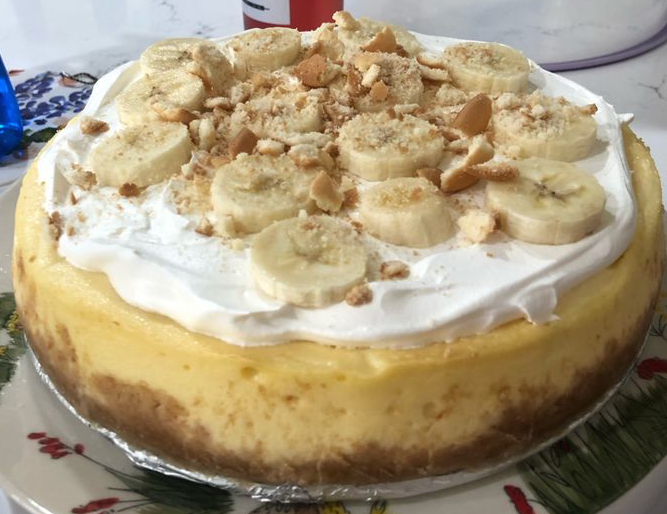 Step 1: Prepare the oven and preheat to 325 degrees F.

To Make the Crust:

Step 1: In a medium mixing bowl, add in all the crust ingredients. Stir until well mixed.

Step 2: Transfer the mixture into the pan and press on the bottom and the sides.

Step 3: Place inside the preheated oven and bake for 10 minutes. Remove from the oven and allow it to cool.

Step 4: Ready the moat pan and reduce the heat of the oven to 300 degrees F.

To Make the Cheesecake:

Step 1: Place the sugar, flour, and cream cheese in a mixer. Beat on low speed until well mixed.

Step 2: Add in sour cream, banana puree, and one egg at a time. Beat until well combined and smooth.

Step 3: Transfer the mixture into the crust.

Step 4: Place inside the preheated oven and bake for 90 minutes.

Step 5: Turn off the oven and let it sit inside the oven for 30 minutes.

Step 6: Remove the cheesecake and let it sit at room temperature for 30 minutes. Then place inside the fridge to chill.

To Make the Bavarian cream:

Step 1: In a small mixing bowl, add in the milk and gelatin. Stir until well mixed.

Step 2: In another mixing bowl, add the yolk and whisk until foamy.

Step 3: Place a saucepan on the stove and turn the heat to low. Add in the sugar, vanilla, and cream.

Step 4: Gently pour in the hot cream into the egg mixture. Put the mixture back to the saucepan and heat until it reaches 160 degrees.

Step 5: Transfer the gelatin mix into the saucepan and stir until well mixed.

Step 6: Transfer the custard into a small mixing bowl and let it sit on a large mixing bowl with ice. Allow it to cool.

Step 7: Whisk sugar and cream until stiff peaks form then add into the cooled custard.

Step 8: Spread the mixture on top of the cheesecake. Place inside the fridge and chill for hours.

To Make the Cream:

Step 1: In a small mixing bowl, add in the sugar, vanilla, and cream. Beat until well mixed.

Step 2: Spread on top of the sliced bananas and cake.

Step 3: Sprinkle the rest of the Nilla Wafer Crumbs.